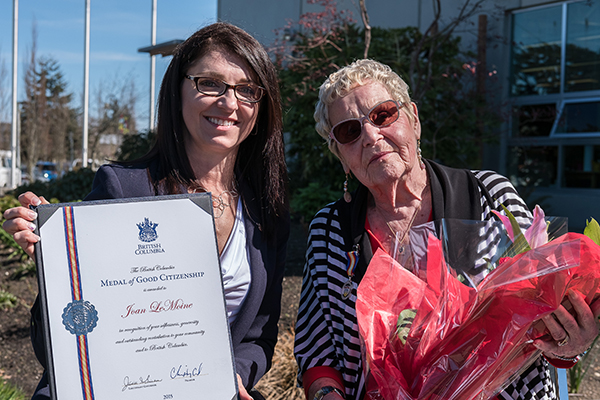 Joan LeMoine has devoted a significant amount of time to SOS and the residents of the Parksville Qualicum Beach region for the betterment of our community. That’s why she was honoured on March 31 with the province’s newest honour, the Medal of Good Citizenship, by Parksville-Qualicum MLA Michelle Stilwell, who is the Minister of Social Development and Social Innovation, on behalf of Premier Christy Clark.

“We’re thrilled that Joan was honoured in this way,” said SOS Assistant Executive Director, Susanna Newton. “Joan has a very recognizable face at SOS, having volunteered tirelessly for many years on the SOS Board and in other capacities, and she’s well respected around the community for all the good work she does.”
The Medal of Good Citizenship “through exceptional long-term service, recognizes individuals who have made outstanding contributions to their communities without expectation of remuneration or reward. The medal reflects their generosity, service and acts of selflessness and contributions to community life.”

At SOS, Joan was on the SOS Board from 1997 to 2004, serving as President, 1st Vice President, 2nd Vice President and Past President. She also volunteers in the SOS Caring for Kids at Christmas program and at special events.
Joan has also volunteered for Cops for Cancer Tour de Rock Fundraising campaign, Branch 49 of the Royal Canadian Legion, Tim Hortons Camp Day fundraising campaign, helping children with special needs, with the Oceanside Community Safety Volunteers and at Coffee with Council.LeMoine was also instrumental in establishing the Parksville Beach Festival Society.