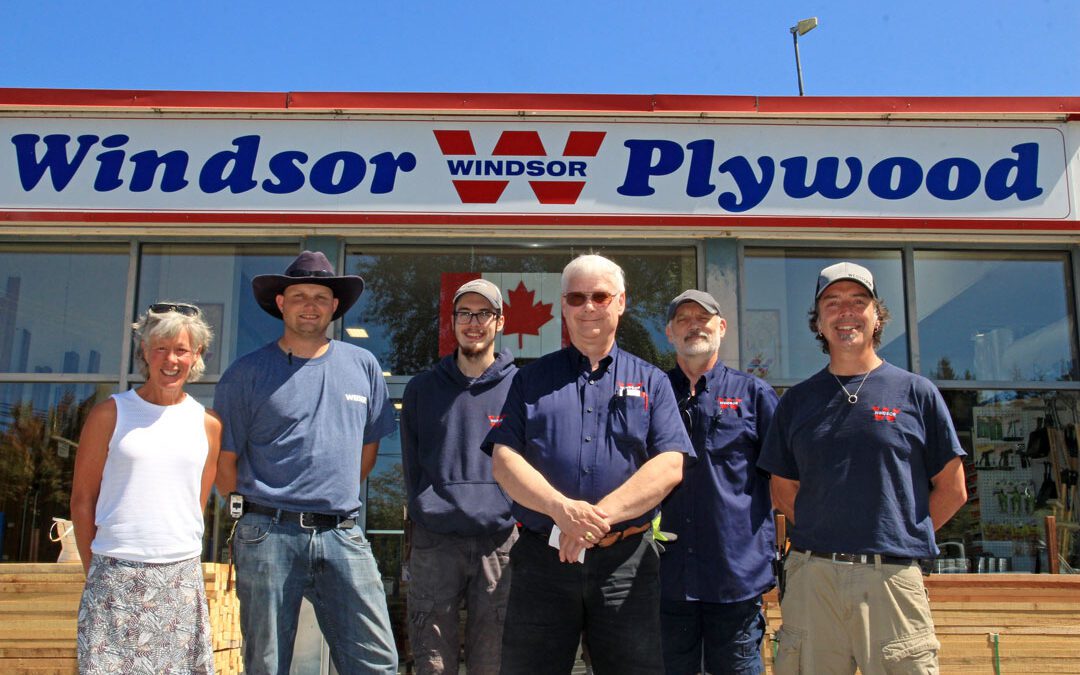 The Windsor Plywood Foundation is helping SOS rebuild capacity and meet needs in the community.

“We’ve been very fortunate over the years,” said Windsor Plywood Foundation Director Cathy Brown. “Windsor is celebrating 50 years, so 50 years later this is a way for us to give back to the community that we operate in.”

Cathy is the daughter of Randle Jones, founder of Windsor Plywood. It all began when Randle purchased Windsor Building Supplies in Surrey in 1969. Over the past 52 years, he has continued to expand the Windsor Plywood name — both corporate and franchise locations — across Canada and into the United States.

About 40 years ago, Randle and his wife “retired” to the Parksville Qualicum Beach area and soon after, they opened the French Creek Store. Cathy says Randle, who is now 87, is still active in the business and continues to come into the three local stores regularly.

Randle and his late wife started the Windsor Plywood Foundation in 2008, working with the Vancouver Foundation to help them support meaningful charities and projects in the areas they operate. Cathy and her father continue to discuss all of the Foundation’s areas of giving.

“He and I talk about every single donation we’re going to give,” she said.

The Windsor Plywood Foundation has joined the SOS Biz for Good initiative — with a $10,000 donation to the Project Rebuild Campaign — because they value the work SOS has been doing for the past 53 years in the area, Cathy explained.

Gene Siegel, manager at the Windsor Plywood store in French Creek, said at a time like this, SOS services are very important to the community.

“We want SOS to be able to continue doing that good work,” he said.

SOS Biz for Good is an important part of the $1 Million SOS Project Rebuild Campaign focused on reinforcing a safety-net for residents of District 69. Businesses can visit the SOS Project Rebuild website to learn more about the initiative and the variety of ways to give. www.sosprojectrebuild.com. 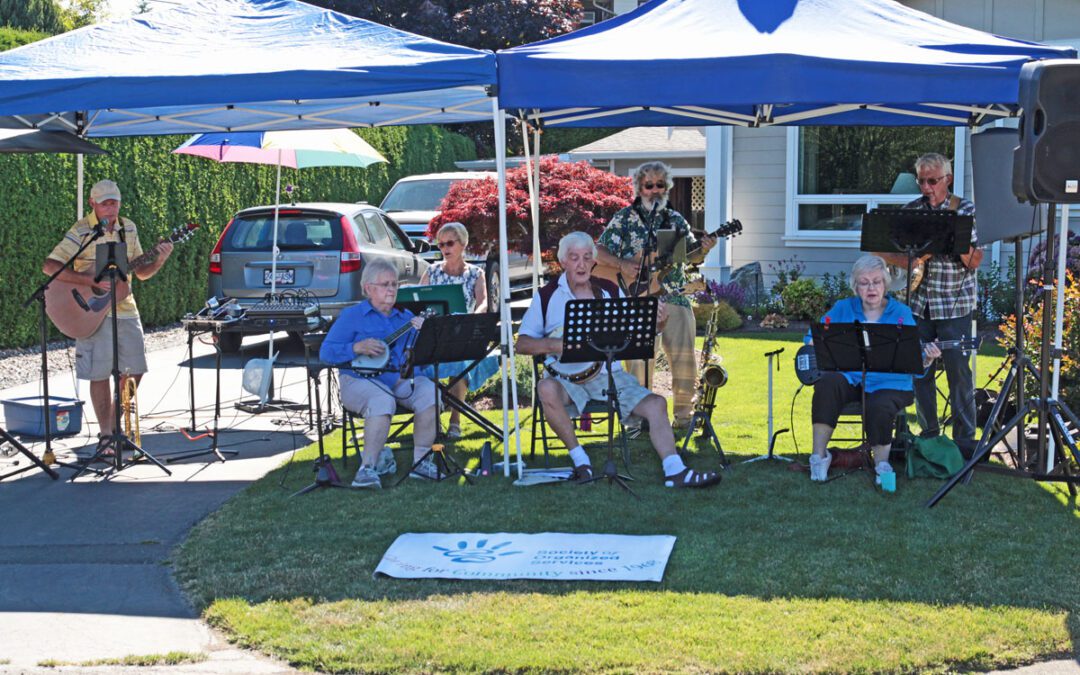 Join in the fun and help raise money for the SOS Project Rebuild Campaign.

Thank you for your support! 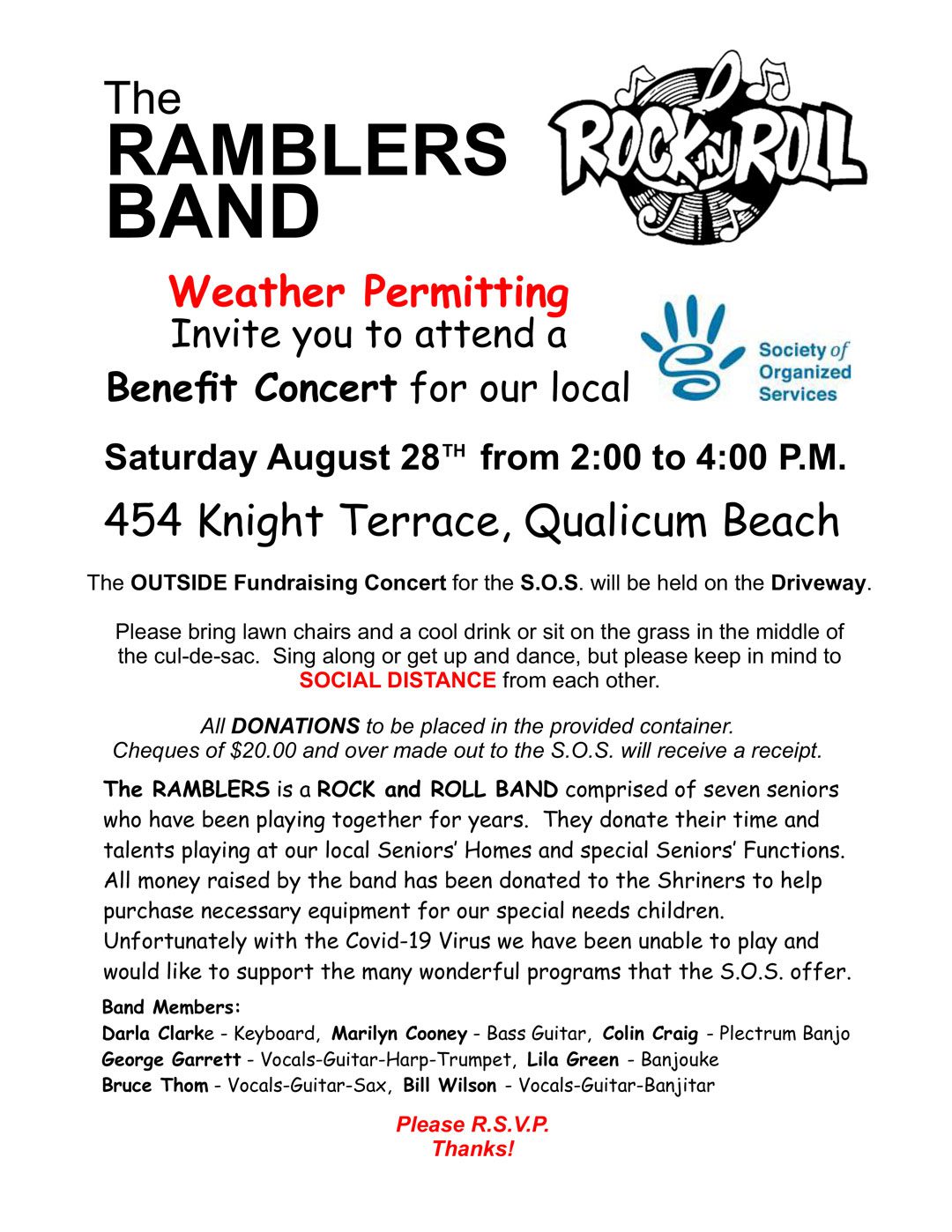 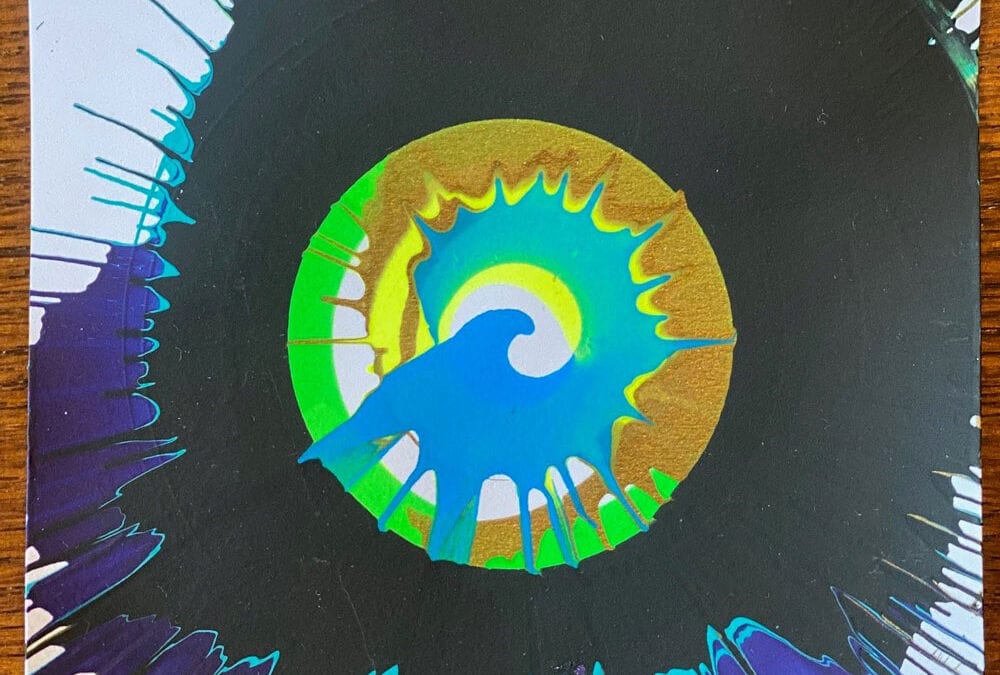 Thank you everyone for your amazing submissions! We had a wonderful time viewing all of these and we know they will impress and delight everyone who views them. Please vote only once and write your name and your vote in the comments section. If you don’t see a comments section, or are having trouble voting on our website, please email your vote to cyfcmanager@sosd69.com or text it to 250-954-9035. Voting is open until June 18. Winners will be announced June 21.

1. Auraelia Alexander solves the Rubik’s Cube. Age 11. “I was inspired to solve the Rubik’s Cube in a short amount of time because I like to challenge myself.” Click here to watch the video. 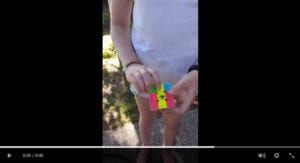 2. Finnley Doerksen loves gardening. Age 8. “My talent is gardening. I like picking strawberries and eating them. My inspiration for gardening comes from my mom.” Click photo to enlarge. 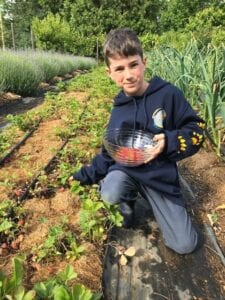 3. Zachary Doerksen can balance on the Railway tracks. Age 8. “My identical twin brother is Finnley Doerksen. My talent is balancing while walking on the railroad for a long time.  I like doing it because its good for your balance and its fun. My dad and my brother Finnley are my inspiration and motivation because they like doing it with me too.” Click photo to enlarge. 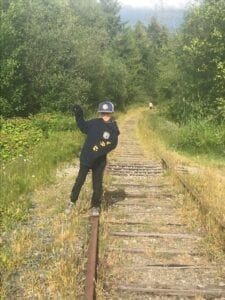 4. Autumn Alexander’s Clay Creations. Age 9. “The reason I like to make clay is because it gives me a chance to use my creativity.”  Click here to watch the video. 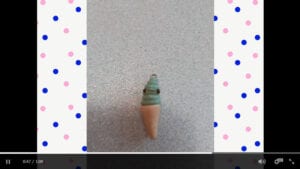 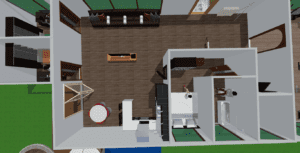 6. Nikki Davies – Horseback Riding with no hands. Age 10. “Horses are the best animal in the world, they are very strong and smart. Riding horses makes me feel good and happy.” Click here to watch the video. 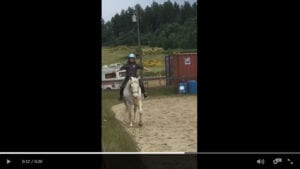 7. Gabriel Adams – Alien Ship. Age 6. “Gabriel says he likes to make crafts and art because they are messy and can be anything he wants. The alien ship is inspired by Ben 10.”  Click photo to enlarge. 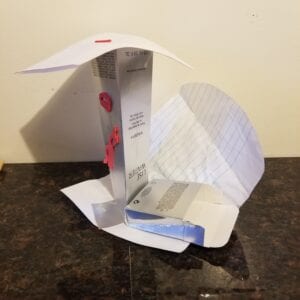 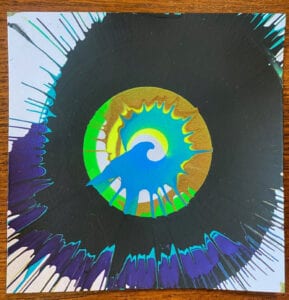 9. Chloe McIntyre’s Runaway Silhouette Video. “I am 12 years old. I’ve seen many people creating videos in this style, and wanted to try it for myself.”  Click here to view the video. 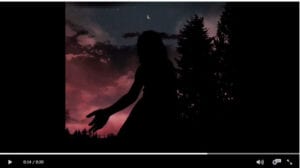 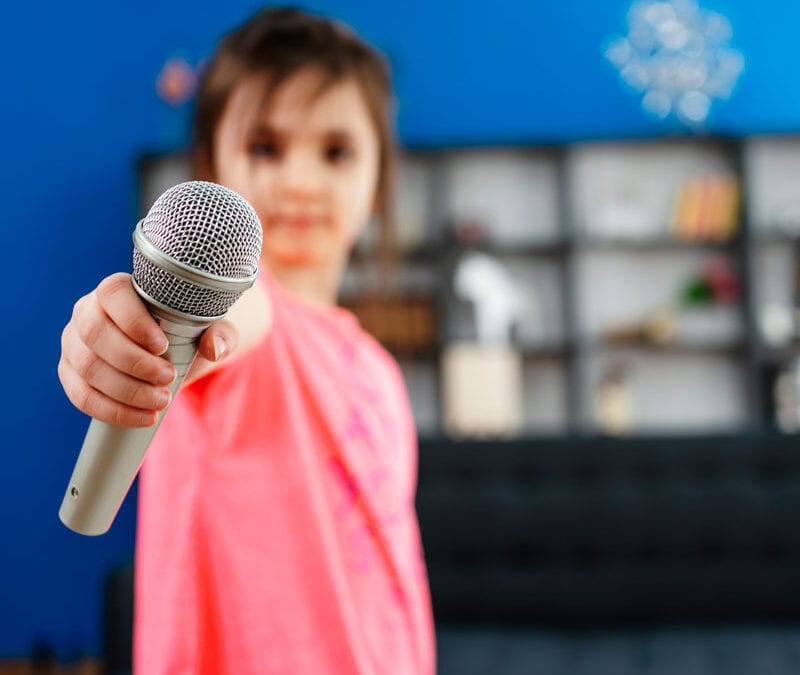 SOS wants to celebrate local talent and encourage kids to express themselves creatively, while reaching outside their comfort zone to help develop confidence and resiliency. Plus, every entry gets an SOS swag bag, and the winners will receive a Thrift Shop shopping experience, and a gift card to a local food establishment. Please follow the instructions on the poster below to submit entries. Good Luck! 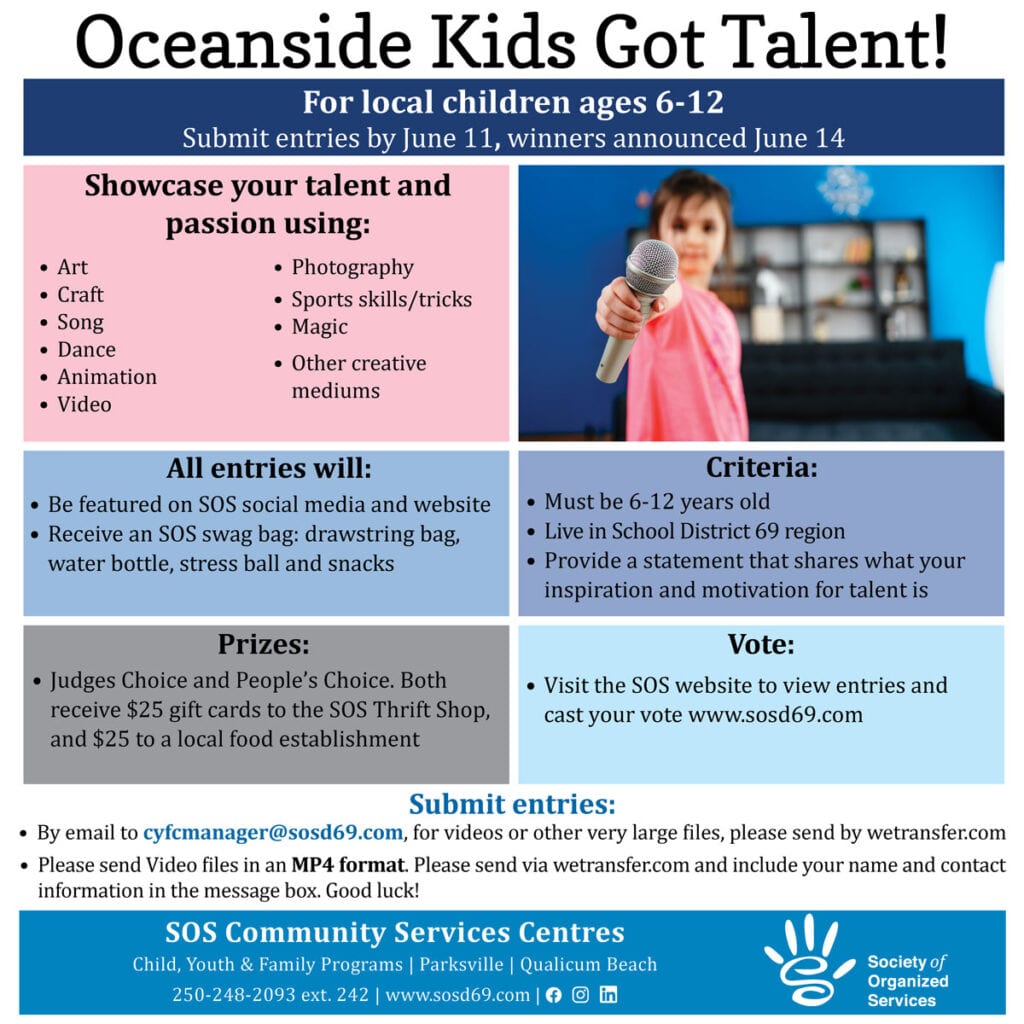 SOS wants to celebrate Youth Week by showing our community how talented our local youth are! That’s why we’re holding a Youth Talent Competition. We know many of you have hidden, and not so hidden talents, so why not share them, get a swag bag, and a chance to win a Thrift Shop shopping experience! Every entry receives a fun SOS bag of goodies that will help keep you hydrated and stress free during these trying times. Plus, you might even have a little fun creating your art masterpiece! Send a copy of your entry to Alice at cyfcmanager@sosd69.com by May 3. Good Luck! 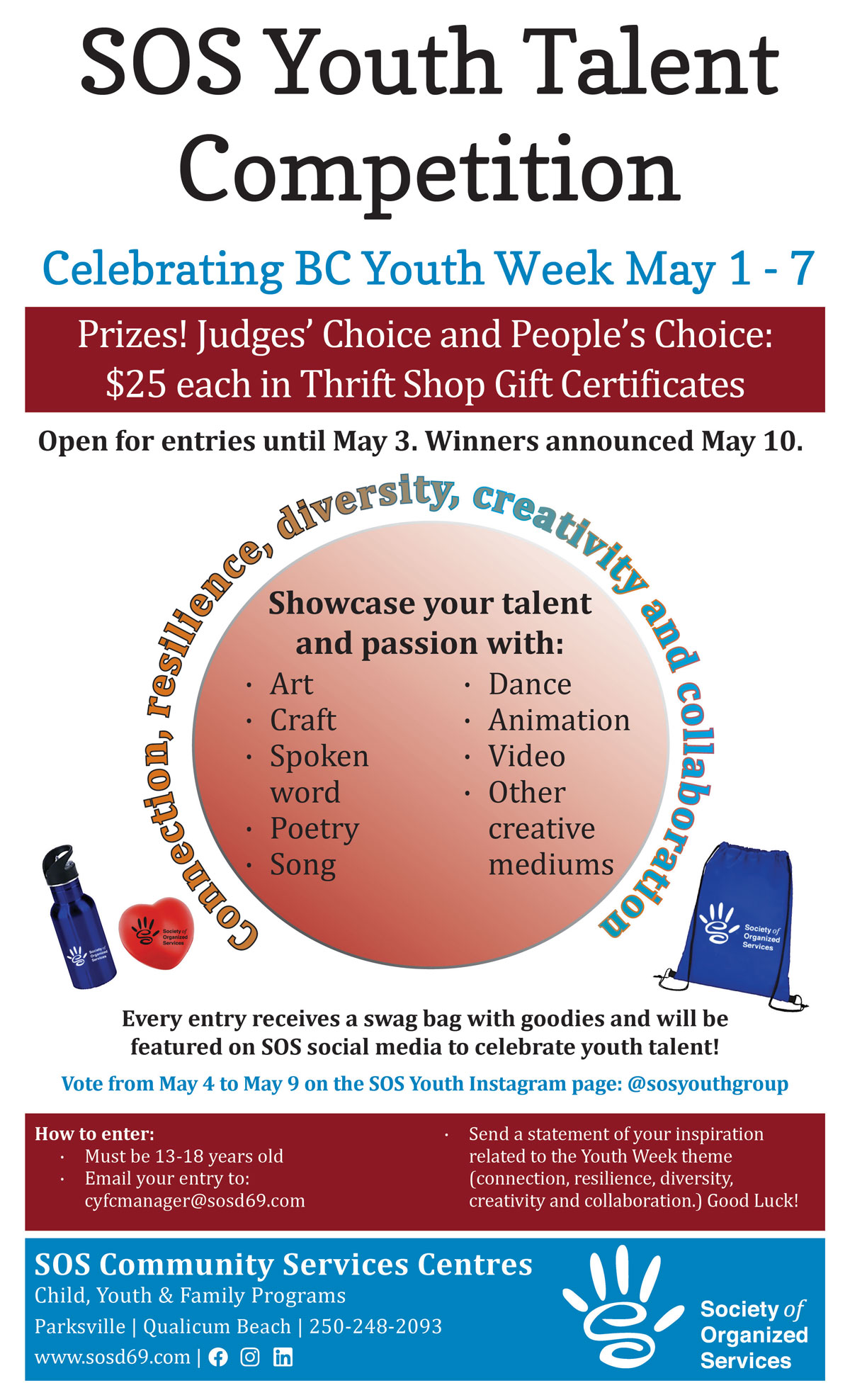